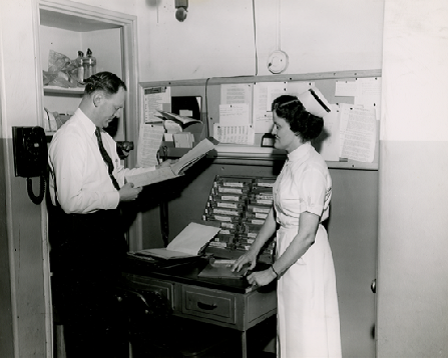 The year was 1976. Lee Ann Quinn had just interviewed with Edna Otto, director of nursing, for a job at South County Hospital.

That night her phone rang. To her surprise, it was Miss Otto, who had told her earlier that day she had no positions open. “How would you like to start tonight?”

Quinn, who had worked at Scallop Shell Nursing Home as a nurse's assistant, knew the job had potential. But that night, as she struggled to find a way into the building – all the doors were locked; she finally had to buzz the Emergency Room – she could not know she was about to embark on a 40-plus-years career that would bridge two distinct eras in the hospital's history.

Miss Otto, who had been appointed to her job in 1962, represented the hospital's past, when nurses were called “Miss” or “Mrs.,” wore white uniforms and caps, and deferred to doctors.

Quinn, who today serves as the hospital's director of infection prevention and control, represented the future, as the institution evolved into an award-winning community hospital of 100 beds. She has seen nurses' roles evolve, hospital stays grow shorter, and outpatient procedures skyrocket. 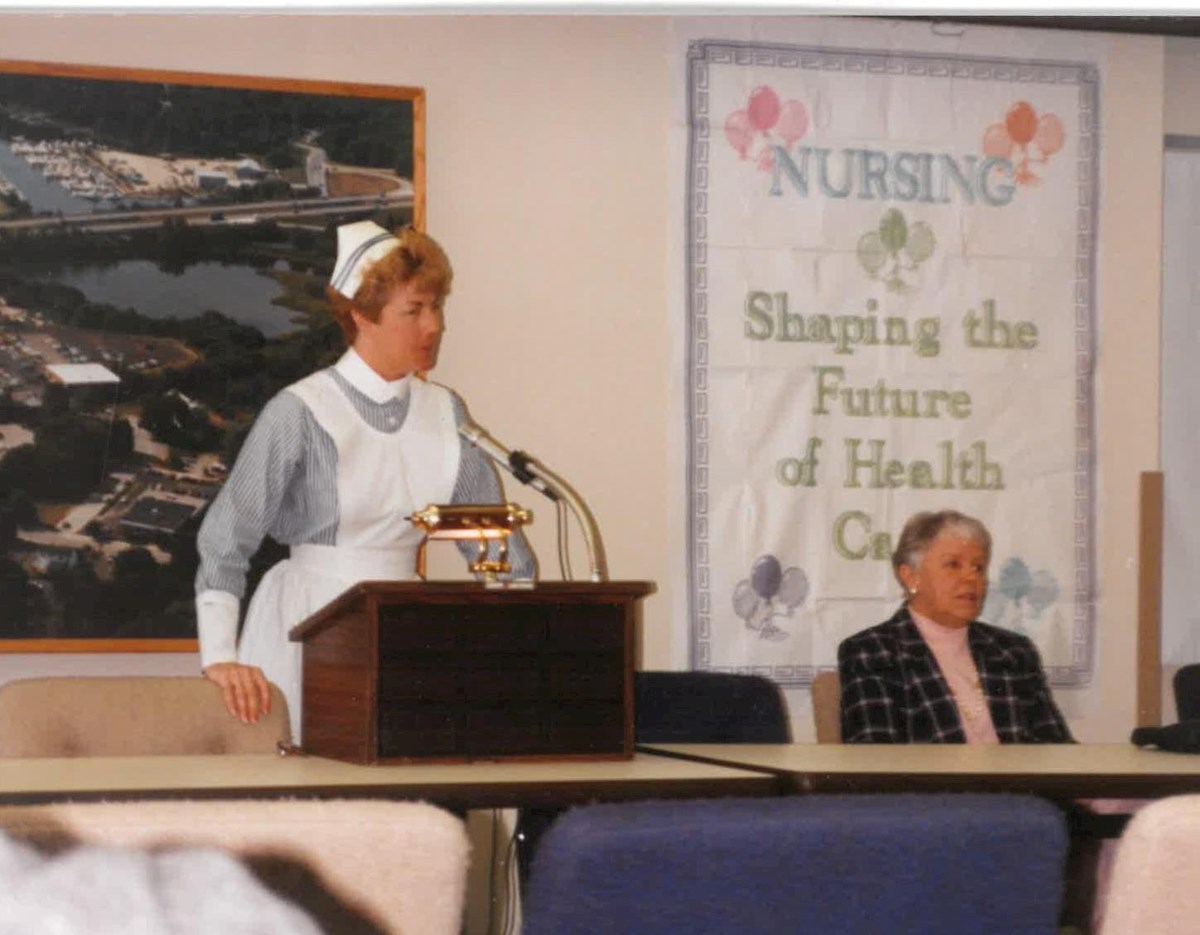 Women were in charge
When the new hospital was built in 1925, Carolyn Jones – who had run the Cottage Hospital with her husband, Dr. John Paul Jones since 1919 – opted not to continue in her role as superintendent of nurses.

It was a powerful and difficult job, equivalent to the hospital president today. South County Hospital would not have a full-time administrator until Donald L. Ford arrived in 1958. Until then, the hospital was run by the Board of Trustees president and the superintendent.

The first woman to fill this role was Maud F. Denico, whom Caroline Hazard recruited from the Jane Brown unit of Rhode Island Hospital. By all accounts, she succeeded admirably. When Miss Denico left in 1939, after nearly 14 years in the position, Thomas F. Hazard, board president, accepted her resignation “with very deep regret.”

Said Miss Hazard in an open letter to her, “You have handled a multitude of details with efficiency and have made the hospital a real center of help in times of trouble.”

With her replacement, Anna C.M. Nelson of the Jamaica, N.Y., Hospital, the trustees began hiring superintendents from outside Rhode Island. Contrary to some accounts, these women often had advanced degrees and extensive administrative experience.

“Her career has been characterized by energy and excellent executive ability,” The Narragansett Times reported.

She was joined by Eileen V.M. Gleeson as assistant superintendent and director of nursing. She, too, had impressive credentials, with degrees from the University of Maryland, Johns Hopkins, and Columbia, in addition to doctoral work at Brown and Providence College and extensive administrative experience.

When they both arrived in 1945, five nurses were added to the staff, including Miss Kathryn Rudolph, whom the hospital described as “an experienced operating nurse” who had served with the Army Nurse Corps in World War I. This was welcome news, as the hospital had struggled during the war to maintain staff, with many nurses serving overseas. The problem was so acute that the Narragansett Times opined it could “threaten the future of the institution.”

To cope, the hospital had relied on Gray Ladies, community service workers, and Red Cross volunteers. “Even the Girl Scouts have been trained to give a lift to the burdened nursing staff and the hospital has closed its private room floor in order to keep open the rest of the institution,” the Times reported.

Besides the new hires, the community was relieved to learn that Rhode Island State College, as the University of Rhode Island was then known, had commenced a course of nursing education. 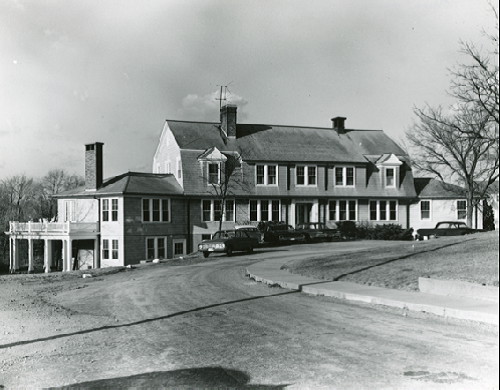 At the Cottage Hospital, beds were so scarce nurses slept in shifts. When the new building was constructed in 1925, the third floor was set aside for nurses and staff.

It quickly became apparent that the quarters were insufficient and that the hospital would need the third floor for patients. Within six months the Board of Trustees was considering a separate building to house the nurses. “Since the opening of the hospital there have been few days when the institution has been down to its normal capacity of 22 patients,” the Narragansett Times reported in 1926.

With donations from the poet Leonard Bacon and his sister, Susan Keith, the new facility was constructed by Louis Bell and named Bacon House in memory of Leonard and Susan's parents, Helen Hazard Bacon (sister of Caroline Hazard) and Nathaniel Bacon.

The hospital's third floor was then converted to two large wards, one for men and one for women – a project paid for by Caroline Hazard and her cousin, Edith Hazard Fobes.

Single nurses lived in Bacon House until they moved on or, like Dorcas Carpenter, met their future husbands. Dorcas and her fiance, Howard Raitano, the hospital maintenance manager, were both on duty during the Hurricane of '38. They married a month later.

But Maureen Daly Blazejewski, who started working at South County Hospital in 1981, noted that many nurses of previous generations remained single.

“These older nurses didn't get married. It was like being a nun,” she said.

Edna Otto was the nursing superintendent when Quinn was hired in 1976 and Blazejewski started in 1981. She never married and lived in Middlebridge with her brother and sister.

“There's a lady who nursing was her life, though she had a very interesting life, she traveled,” Blazejewski said. “She lived with her bachelor brother and another maiden sister. They had beautiful gardens.”

Mary Delehanty was the head nurse.

“Miss Delehanty, God rest her soul, she was [a] one-of-a-kind head nurse,” Quinn said. “She kept the doctors in check and she kept us as professional as possible. She had a military background.”

In an interview with the Narragansett Times in 1994, for the hospital's 75th anniversary, Delehanty recalled what nursing was like in the post-war years. She started at South County in 1946, paying $7 a week for room and board at Bacon House, with meals taken in the hospital cafeteria. She didn't need a car.

Nurses of Otto and Delehanty's generation deferred to doctors, and the job was one of ritual and formality.

“In the '60s nurses would stand when doctors came in to the nurses station,” Blazejewski said. “That just changed as I graduated from nursing school.”

Barbara Hackey, who retired as nursing supervisor of the OR, recalled those days at South County in a 1994 interview. She wore a starched uniform and her cap from St. Joseph's Hospital.

“There was a lot of respect toward physicians,” she told reporter Karen Gavin. “You called them Sir.”

The Medicare era
A number of forces would change the job of nursing not just at South County Hospital but throughout the medical community. When Medicare became law in 1966, it would usher in a number of consequences.

The pressure to reduce costs would lead to shorter patient stays, which changed the relationship between patient and nurse. With the advent of electronic medical records, nurses today are responsible for more documentation than could have been conceived of in the mid-20th century.

Quinn, bridging these eras, recalls when “length of stay” was not a buzzword.

“Patients stayed until the doctor said it was time to go home,” Quinn said. “We had quite a few patients who were here for months and months, and they were part of our family.”

The Borda Wing, constructed in 1970, was designed to speed patient recovery and shorten hospital stays. Now such long-term cases – Quinn recalled the victim of a motorcycle accident and a patient suffering from peritonitis – would be referred to a rehabilitation facility.

A new path
Today, South County Hospital is at the cutting edge of nursing care. Last year (2018) it was redesignated a Pathway to Excellence hospital by the American Nurses Credentialing Center, a rigorous program that prioritizes nurses' involvement in decision-making.

“It's encouraging the nurses to participate and being part of the say in how we do things,” said Bobbie Fay, RN, the hospital's director of critical care and cardio-pulmonary services. “It encourages the autonomy of the nurse.”

As an example, Fay noted a nurse initiative to change the protocol on removing Foley catheters from patients. While before they needed a doctor's approval, now nurses have the authority to remove the catheter absent certain conditions. The result has been fewer patients getting bladder infections.

Fay started at South County in 1971, as a ward secretary, and began working as a nurse on the pediatric unit two years later after receiving her nursing degree. She has worked there continually since 1981, and today manages 85 employees in seven programs, including the ICU.

She has seen a great evolution in patient care, fueled not only by greater nurse education – most of the staff is comprised of registered nurses – but also advances in medical knowledge.

“The insurance companies don't let [patients] come into the hospital unless they're really sick,” she observed. “We're much more aggressive. We try to return them back to their original health, but we have to get them there faster. And I think we know more, so we do things better.”\

Quinn also is energized by the hospital's commitment to 21st-century technology and quality control. She cites its Opiate Sparing Pathway initiative to reduce dependence on opiates for pain relief, and Early Recovery after Surgery, a comprehensive new program to better prepare surgical patients for their operations and reduce their length of stay.

“We hope to get our patients in and out with fewer to no complications,” she said.

Today, Quinn's office could not be in a more appropriate place – Bacon House, where nurses once boarded.