The first 100 patients who had robotic surgery at South County Hospital with the da Vinci Xi Surgical System were recently invited to learn more about this cutting edge technology from those who know best: their own surgeons.

The February 25 event was held to celebrate the hospital’s 100th successful da Vinci surgery. At the end of the program, those in attendance were allowed to handle the controls of the da Vinci to experience the robotic technology first-hand.

“I was curious how it works,” said Robert Nula, who had two da Vinci procedures within a 11-week period. “When I had my operation, I wanted to wait to be sedated so I could get a close up look at the da Vinci System.”

Along with the first 100 patients, other invited guest included board members and hospital administration. The program included remarks and demonstrations from general surgeon Dr. Joseph Brady.

The da Vinci Xi Surgical System has a 3-D high definition vision system, specialized instruments, and computer software that allows the surgeon to operate with enhanced vision, precision, dexterity, and control. For patients, it means a less invasive procedure with quicker recovery and less pain.

While the patient stories vary, there was one recurring theme: each wanted surgery with an experienced surgeon utilizing the latest technology. They found themselves in the right hands as the doctors using the da Vinci have performed more than 2,000 surgeries using robotic technology.

Paul Johnson
Paul Johnson was preparing to celebrate his 36th wedding anniversary when he received a troubling phone call that his biopsy confirmed a diagnosis of prostate cancer. After meeting with his physicians, he knew he wanted his surgery performed with the da Vinci technology.

Paul delayed his surgery for several months so could walk his daughters down the aisle at their weddings in May and September 2018. His surgery took place on October 5, 2018. Paul is highly complimentary of his medical team and others who cared for him at South County Hospital. He singled out Emily Costa, RN, clinical nurse coordinator in the Department of Urology, for her knowledge, compassion, and accessibility to answer any questions he had. “The staff was wonderful,” said Paul.

Best of all, Paul had follow-up testing and his PSA is now at an undetectable level.

Robert Nula was diagnosed with an aggressive form of prostate cancer. In December, he underwent a successful radical prostatectomy. As he was recovering from surgery, Robert noticed that some of the swelling and tenderness in one particular area was not getting better. After an examination and testing, it was discovered that he had a hernia.

His operation was performed by Dr. Brady on February 21 and just four days later, Robert was one of the people in attendance at the da Vinci lecture and demonstration. Robert didn’t need painkillers after either procedure. It was his first experience at South County Hospital and he lauded the staff and facilities as outstanding.

“I had three of the best surgeons in the state utilizing the latest technology,” he said. 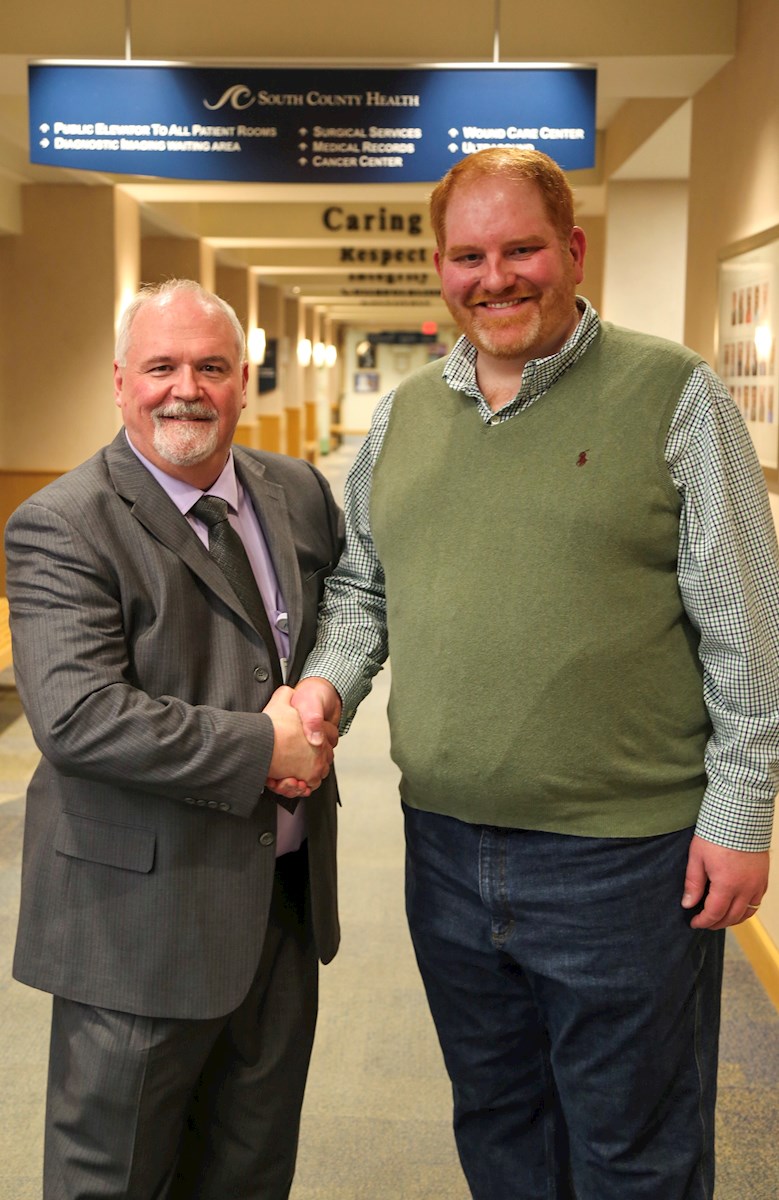 Erik Elsdoerfer was also excited to see the technology in action, in part because of his background as an electrical engineer. Erik had a growth on his stomach that was diagnosed as an abdominal hernia and continued to grow until surgery was necessary. His physician recommended he visit Dr. Brady, who also used the da Vinci robot to perform his surgery. “It was a great experience,” he said.

In 2008, Brian Jones was treated for prostate cancer with a regimen of radiation therapy. In 2018, he underwent a CT scan to further diagnose what he thought were problem kidney stones acting up once again. The radiologist saw what he thought might be a tumor on the lobe of his kidney.

Like Paul Johnson, Brian delayed his surgery to attend a wedding (in this case, his granddaughter). His surgery took place on October 18, 2018. He wanted the surgery to be done utilizing the da Vinci robotic technology. “I hadn’t been a patient at South County Hospital but I knew of its reputation.”

In October, a quarter-sized cancerous tumor was removed from the lobe of Brian’s kidney. Once his surgery was complete, Brian said his hospital stay was a good one where he didn’t feel rushed to leave.

“I liked everyone I met,” he said. “The nurses were terrific. They were very attentive and well-briefed during the nursing handoffs between shifts.”

While Brian had done hospital histories and reported on health care, “None of that mattered,” he said. “When you’re a patient, it’s a different perspective. I had confidence seeing everyone knew how to do their jobs.”