South County Hospital in Wakefield, RI, a leader in orthopedic surgery for hip replacement and knee repair, recently became the first hospital in the world to offer the Mako robotic arm-assisted technology for total knee procedures. 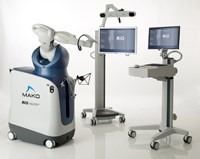 The success of the clinical trials led to the launch of the first commercial release of the procedure anywhere in the world.  Since its approval, Dr. Marchand has performed another 10 total knee resurfacing procedures, sparking interest from others seeking relief from knee pain.

According to Dr. Marchand, the Mako technology allows for consistent pin-point accuracy in bone preparation, implant placement, and balancing of ligaments. It is also conducive to quicker recoveries for patients.

While the system’s name refers to the robotic arm that guides surgeons, the Mako system consists of sophisticated hardware and an advanced software system that programs the robotics.

A pre-operative CT scan of the patient’s knee, along with information collected from arrays that are placed on the patient in the operating room, creates a 3-D image of the joint. This information and the surgeon’s surgical plan becomes the map that guides the cutting and burring of bone and the positioning of the implants.

Community lecture
Dr. Marchand will give a presentation on the Mako robotic-assisted technology for total knee resurfacing at a free public lecture on Wednesday, September 28, at the Crowne Plaza in Warwick at 6:30 p.m.  Those interested in attending are asked to reserve a seat online or by calling 401-788-1689. More >

Blue Distinction Centers+ are hospitals recognized for their expertise and efficiency in delivering specialty care.

The designation was awarded based on a thorough, objective evaluation of performance in the areas that matter the most—quality care, treatment expertise and overall patient results. The criteria are established with the help of expert physicians and medical organizations.

According to Blue Cross and Blue Shield, Blue Distinction Centers+ have a proven history of delivering better quality and results than healthcare facilities without these recognitions.