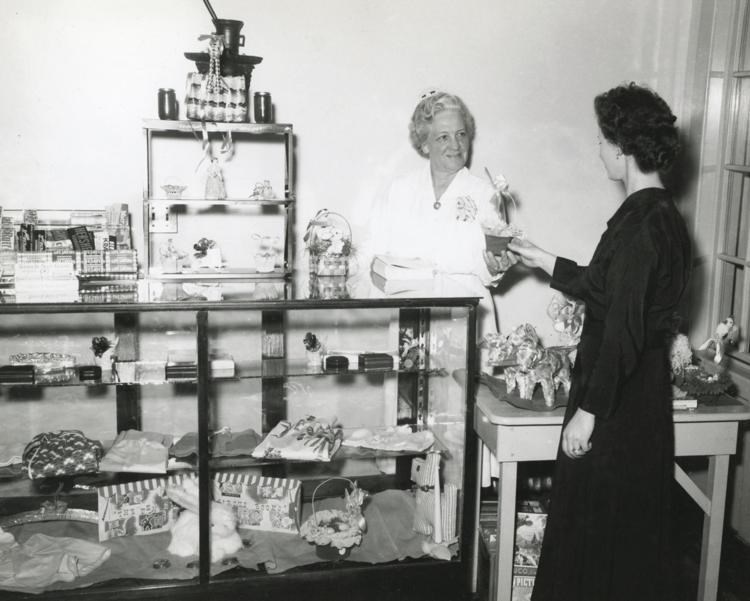 A 1955 report of the Women’s Service Committees described the impact of volunteers on day-to-day life in the hospital. Their projects included wheeling a service cart to patient rooms every Tuesday and Friday afternoon, “serving the patients and staff, cheering and chatting with the sick and acquainting the volunteer worker with the hospital.”

Beginning in 1949, the committees sponsored a counter in the hospital lobby selling “home-cooked food and attractive salable articles,” which raised $90 in its first two weeks. The counter made front-page news in the Narragansett Times in November 1952, when its offerings included “a very choice ham.”

By the 1940s, an arm of the Red Cross called the Gray Ladies had begun serving the hospital. Headed by Mrs. Bowler, the dozen Gray Ladies “go to the hospital every day and are proving a great help,” according to the annual report of that year.

And in 1939 the Lions Club donated a fluorescent illuminator for reading X-rays, Dr. John Paul Jones solicited $500 toward the new X-ray machine, and it was recorded by the Board of Trustees that “Mrs. Harry James donated two terrycloth bathrobes for the convenience of the X-ray patients.”

Volunteers
Brenda (Burton) Bolster was in elementary school when she lived across the street from South County Hospital. She remembers walking over to Bacon House with her mother, a nurse, to volunteer after school.

“Down in the basement I had to fold bandages,” she recalled. The material came in bulk and volunteers used a cardboard guide to cut and fold it to size. “So for an hour and a half every day after school I’d be over there and either Hilda Percival or one of the other nurses would supervise me.”

Volunteers who wound surgical dressings, saved the hospital about $2,000 year.

In one of the more unusual fundraising activities in the hospital’s history, volunteers came to Bacon House on Tuesdays from 2 to 4 p.m. to sort stamps. From 1949 through the 1950s, Frederick R. Hazard of Saunderstown headed up this effort to raise money by collecting canceled stamps from around the world and selling them in bulk to companies who provide stamps to collectors.

Gifts of land
The hospital has had many benefactors over the years, but some of the most recognizable have donated either large sums for hospital construction or property that could be sold for cash.

In 1938, a benefactor recorded as Mrs. Eldred donated her home to the hospital, but provided a life lease for her sister, Mrs. Whaley. In 1943, Lillian M. Knowles bequeathed land in Point Judith that the trustees immediately decided to sell. (Donors who include South County Health in their estate planning are now recognized as members of the Flagship Society.)

Two of the more unusual donations were far apart – one, less than a mile away, the other in Puerto Rico.

In 1996, upon the closing of Kenyon’s Department Store in Wakefield, owner Carol Kenyon Hazlehurst – a hospital trustee – announced she was transferring title to the Main Street department store to the hospital. Mindful of the building’s commercial zoning, the hospital relocated its South County Surgical Supply there, but eventually the building was sold.

The bequest of the Borda family, which paid for construction of the Borda Wing in 1970, was more complex. Part of the family’s estate included a 2,500-acre sugar plantation outside San Juan, which hospital Trustee Ben Sturges referred to as “Esperanza.”

The Borda family had a long history in Narragansett. In 1907, the twice-widowed Avice Weed – who had once been married to the only son of Gov. William Sprague – married Wenceslao Borda, whom news accounts described as a “wealthy Puerto Rican planter and lawyer” and the former U.S. Consul General to Puerto Rico. Two years later they purchased the famed Sprague Mansion in Narragansett shortly before it was destroyed by fire.

In 1939, Borda’s 22-year-old son Wenceslao was driving in North Kingstown when his car left the road and hit a utility pole. He was taken to South County Hospital with serious injuries. Whether this led to his family’s philanthropy toward the hospital is not known, but in 1970, the Borda Wing at the hospital was dedicated to him and his brother, Joseph Wensceslao Borda, by their sister, Emilie Luiza Borda, and Emilie Bell Obnovlenski.

The Borda Wing is one of four hospital additions to bear the name of its benefactors. The others, in order of construction, are the Hazard Wing, in 1952, named for Thomas G. Hazard Jr., the hospital’s first treasurer; the Read Wing, named for Frederic B. Read, Jr., longtime hospital trustee, built in 1981; and the Frost Family Pavilion, named for Frederick G. Frost III and his late wife, Tina Read, Frederic Read’s daughter. Frost made a substantial donation toward construction of the $21 million, three-story addition, which opened in 2007.

Other areas of the hospital bear individual names – the Sturges Building, which is the old part of the hospital, renamed in 1981 for longtime Trustee Benjamin R. Sturges; the Potter Conference Center, dedicated in memory of Dr. Henry B. Potter, the first chief of the medical staff, in 1982; and the Surgical Pavilion, dedicated to longtime physician Dr. Thomas A. Nestor in 1988.

Although the word “community” does not appear in the hospital’s informal or corporate names, it is inherent in each of these tributes. South County Health was built by the community, for the community.