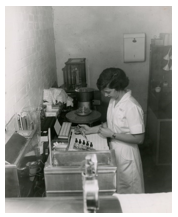 In 1962, South County Hospital's clinical laboratory was processing 14,125 procedures annually. Within 15 years, that number shot up to 275,345 a year – an astonishing increase. Yet, when Maureen Klaboe was hired as a lab tech two years later, in 1979, part of her job was to enter the orders and results manually.

“When I first started, we didn't have a computer system,” she recalled. “So we used to write down all the values from the machines – glucose 100, BUN 12, etc., and we'd transcribe them onto a multi-part form that had all the reference ranges on it. The original copy would go to the doctor and then we'd keep a file in the lab. We'd use the back copy to go to the billing office.”

In November 1979 the hospital opened a new clinical lab as part of a two-phase expansion that added X-ray space and replaced the old Emergency Room. The technology also began to evolve.

The lab's equipment in 1979 included a flame photometer, which measured sodium potassium through the color spectrum of a real, tiny flame.

“It was pretty primitive,” Klaboe said.

Back then, there were no universal protocols on protective garb in medical settings. Such standards were not adopted until the mid-1980s.

“People would smoke in the lab,” Klaboe recalled. “You'd have your coffee next to a tube of blood specimen. We didn't wear gloves.”

Lab workers also practiced mouth pipetting to transfer liquids, in much the same way you would
siphon gas from a car tank.

“That was a really archaic practice,” she said. “You'd be sucking up blood to transfer it in a certain amount from one container to another.”

It was the fear of contracting hepatitis, not AIDS, that changed the protocols at South County Hospital.

Smoking and drinking beverages are a thing of the past in these sterile lab environments. Thankfully, so is siphoning blood by mouth. Clinicians and techs wear protective clothing and gloves to handle any specimens, and those specimens are protected from contamination.

Under modern protocols and regulations, South County Hospital and other healthcare organizations are diligent in their protocols and practices to become fully accredited and conform to all OSHA and industry standards.

Perhaps no computer innovation changed the physician-patient dynamic more than the Electronic Medical Record. Love it or hate it, doctors say the change from paper charts to electronic record-keeping has transformed the way physicians practice for good.

When the Telecommunications Act of 1996 was signed into law, it created a committee to study electronic medical records and offered incentives for hospitals and physicians to adopt them. EMRs, as they are called, did not become mandatory until 2014.

“I’d get a call at night from the ER about a patient. Maybe he's got chest pains. Maybe he’s another doctor’s patient. I might know nothing about this patient,” Dr. Brandion said. “I've got to get in the car, drive to the Narragansett office to grab a paper chart, bring the paper chart over to the emergency room, go through the chart ….”

With EMR, he said, patient records are immediately accessible through a cellphone.

“I know exactly what's going on. I can look at a patient’s echo[cardiogram] on an app. There's so much information that I have,” he said of the benefits of EMR.

One early adopter of EMR was South County Internal Medicine in Wakefield, which began using the system in 1997.

“The concept was that the medical records would be more complete, they would be legible, interoperable or shareable within the office, to start with,” said Dr. N.S. Damle. “Everybody in our office can access the record for whatever purpose they need.”

Good, but not perfect

The government regulations did not require that private companies' systems had to be compatible with each other’s to share information. In some instances, one department’s system may not be compatible with another’s even within the same organization.

Adding to the challenge, each state’s Health Department has its own system, making electronic transfer of records between states difficult.

“I log into five EMRs a day to get the information I need,” Dr. Brandon said.

The EMR can also be a challenge for physicians whose patients want to follow them to another system.

Cardiologist Dr. John F. Murphy recently returned to South County Hospital after spending time at another healthcare system. A number of his patients wanted to remain with him at his South County Cardiology practice. A major obstacle to that transfer was that the two organizations use different, non-compatible EMR systems.

In the first months of 2019, Dr. Murphy worked from two computers at his desk – each one set up with one of the two EMR systems.

In 2011, South County Health adopted the Greenway system for its medical practice groups. Klaboe, who was knowledgeable in using the hospital’s Meditech system, was recruited from the lab to the Information Technology department to make sure the primary care physicians and specialists using the Greenway system in their practices were also able to access the Hospital's system, Meditech.

Another downside to the EMR systems is expense. After researching an upgrade to the technology used at South County Health, it would cost approximately $12 million to integrate the hospital system with the medical group system, and $30,000 to $40,000 per year, per physician to keep the systems updated.

Dr. Joseph O'Neill, a retired obstetrician and former vice president of South County Hospital, is among the detractors of the EMR mandate. He points out two areas of practicing medicine – patient care and financial prudence – that are impacted by the switch to EMR.

According to Dr. O’Neill, the EMR was supposed to drive down costs and improve outcomes. But once implemented, Medicare found “the cost was higher by a lot and the value was the same in terms of the patient,” he said.

EMR’s and the physician/patient relationship

“It's harder to follow the narrative of a patient's history with the computer programs, which have a lot of boxes to be filled in, but not a cohesive story of symptoms, diagnosis and treatment,” he said.

While supportive of EMR, Dr. Damle agreed that it can be a problem.

“What you get is a series of notes that are duplicates of each other because there's been much copying and pasting of the same information, so you lose that narrative,” Dr. Damle said.

Still, it seems that the EMR's advantages – particularly in being able to view and share test results and patient histories – have far outweighed the disadvantages.

“I see the EMRs as more positive than negative,” Dr. Brandon said. “It takes a lot of work and effort to master it … It is a skill. You have to balance having your nose in the computer versus paying attention to the patient.”

Next: The Growth & Future of South County Health