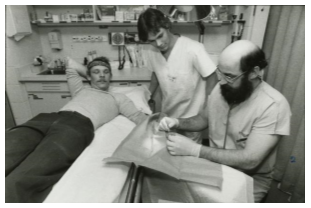 On May 19, 1973, the ambulances began rolling into the South County Hospital parking lot. They carried the 11 surviving passengers from the Comet, a 50-foot charter fishing boat that sank seven miles off the coast of Point Judith. They also transported the 12 bodies of those who did not survived. It was a day that Emergency Department personnel would never forget.

“They set up a morgue [in] a conference room,” said Irene Leonard, a registered nurse who worked at the hospital from 1972 to 2014. The ER was flooded with reporters and anxious loved ones, she recalled. “A lot of the [patients], they didn't have the right IDs plus the families didn't speak English.”

The Comet disaster prompted the hospital to establish a helicopter landing pad in the parking lot the following year, providing rescue helicopters with quick access to medical services. Since then helicopters have not only brought patients to the ER, but also transferred them to regional medical centers.

Emergency care then and now

The helipad plays a significant role in getting patients the medical care they need. Aircraft not only transports patients to and from South County Hospital, but during the Blizzard of 1978, a helicopter was able to deliver much needed intravenous fluids and medication.

Throughout its history, one of the hospital's most vital functions has been emergency treatment. From the time the brick hospital was built at 100 Kenyon Avenue in 1925, the Emergency Department has evolved from a room accessed by ringing an exterior bell. Once inside, patients were taken to a suite of treatment rooms.

In the 1920s, the hospital had its own ambulance which provided little more than a conveyance. In 1928, Board of Trustees member Theakston de Coppet donated a new ambulance to replace the hospital's older vehicle. It made 50 trips a year totaling 1,000 miles.

In 1939, the hospital got out of the ambulance business when the South County Ambulance Corps was formed. The Corps, organized to serve South Kingstown, Narragansett, North Kingstown, Exeter, Richmond and Charlestown, raised $500 to buy a Packard ambulance with a heavy-duty chassis. Gradually the towns formed their own emergency response teams, and the organization disbanded when the town of South Kingstown took over its function.

In the early days, the hospital provided emergency coverage with a night bell system. It was the mid-1970s before true 24-hour coverage was available. Dr. Timothy Drury, an ER physician from 1978 to his retirement in 2016, helped usher the department into the modern era.

While a resident at Rhode Island Hospital, Drury had met Dr. Chris Tsonas, a fellow resident who had begun working in the South County Hospital ER with Dr. Claude Koproski. Prior to them, the hospital had no full-time physicians, using Navy doctors from Quonset Point. After Drury completed his Public Health Corps service at the Wood River Health Center, he joined them in 1978 to practice in the small facility that consisted of one trauma/cardiac room and three “cubby holes” converted from closets.

In the earlier days, a shift might be staffed by one secretary, a nurse and a technologist. Joyce MacManus began working at South County Hospital in 1971 as an X-ray technologist and part of the ER team.

“There was no chain of command … it was just such a tight, close community of people. I was very much a part of it because I worked the evening shift alone,” she said.

The front line of the ER

Those who worked in the Emergency Department were witness to the results of several grisly accidents.

“There were no seat belts, no air bags. The ambulances would bring the people here to stabilize them. We saw a ton of bad trauma. We pulled each other through,” Drury said of the camaraderie of the ER staff. He was able to put the difficult days behind him.

“Some people remember that stuff and some people don't. I'm one of the 'don't remembers,' ” Drury said.

Shortly after Drury was hired, Dr. Robert Conrad, the surgeon then in charge of the ER, helped design a new facility. The new 12-bed ER was part of a $6 million project from 1979 to 1981 that included new clinical labs, expanded X-ray facilities and a 57-bed addition.

Drury eventually became ER director and by 1980 the department was staffed with three nurses, a technologist and a physician.

The ER expanded again when Express Care opened in 1986. One familiar face at Express Care was the late Dr. John J. Walsh, who began working there after retiring as the hospital's chief of surgery. Walsh, with his friendly manner and wealth of knowledge, quickly became a patient favorite.

Another longtime ER physician was Dr. Harold (Sandy) Falconer, a pediatrician who began working in the ER in 1971, before moving to Maine.

In 2003 the ER was remodeled again, this time under Drury's direction. The new facility brought 24 private treatment rooms. Drury also hired a nurse practitioner, Pamela Burlingame, and by the time he left in 2016, six NPs were on staff.

“That was a big battle,” Drury recalled, because the medical staff was initially skeptical of the position.

Dr. Conrad hired the hospital's first physician's assistant, Rick Moffitt, in 1983 to work with him in the operating room. Today Moffitt remains a familiar face on the ER staff.

Despite its often hectic and unpredictable nature, the ER gave Drury many fond memories.

As Washington County became more populated, so did the number of patient visits to the ER. By 1987, more than 23,000 people a year sought emergency care there. By 1993, that number had topped 30,000.
In fiscal year 2018, the hospital recorded 27,594 emergency visits, while South County Health’s Express Care practices in East Greenwich and Westerly drew 24,811 patient visits.