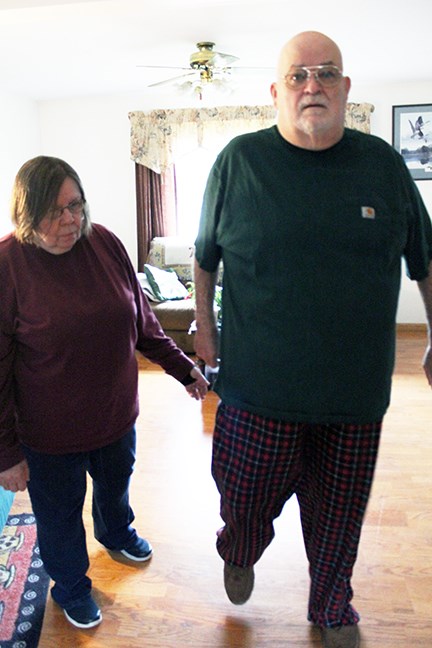 During his 41-day hospital stay, Michael Jaye wasn’t sure if he would live or die. Struggling to breathe and having an overall feeling of weakness, the 67 year-old was admitted to a hospital in his hometown of Westerly where he received treatment for possible sepsis, acute respiratory failure, debility, and other medical concerns. It wasn’t until after his discharge from the hospital and four months of care provided by South County Home Health, did Michael realize that he would be ok.

According to Michael, the doctors at the hospital diagnosed him with chronic inflammatory demyelinating polyneuropathy (CIDP), a neurological disorder that contributed to his respiratory failure. They began treating him with intravenous immunoglobulin (IVIg), but his condition worsened.

“Everything started shutting down on me. I had every failure known to man,” Michael said. “I basically died.”

Throughout the ordeal, Michael had seen numerous specialists who tried to pinpoint the source of his failing condition. He also continued under the care of Dr. Robert E. Fox, his longtime primary care physician who practices within the South County Medical Group.

“I went to see Dr. Fox to make sure he was communicating with the other doctors. He knew my history and changed (some) medication,” Michael said.

That decision led to marked improvement in his medical condition, but Michael was far from recovered.

As his medical condition slowly improved, he still needed a significant amount of rehabilitation to get him back on his feet, literally.

“I couldn’t stand up for more than two to three minutes,” he said of his post hospital stay.

In addition, depression began to set in as his independent lifestyle now required assistance to stand, walk, and attend to activities of daily life.

“The first thing (the South County Home Health staff) did was to get me up,” he said of the start of his recovery. “My legs would just buckle.”

Each member of Michael’s home care team was dedicated to not only get him back on his feet, but get his mobility back so he could enjoy a higher quality of life.

“They showed me how to do a lot of things,” he said. “If I had to pick a superstar it would be Linda,” Michael said. “She went above and beyond.”

Occupational therapist Linda Curry, an 11-year member of the South County Home Health team, continually monitored his condition and pushed him to improve his motor skills. She also emphasized that successful outcomes are achieved when caregivers and patients work together.

“He was motivated to return to independent living and was willing to follow recommendations made by his therapists in order to improve,” Linda said. “At times this was difficult for him as he had fallen a number of times and was fearful of another fall. But to his benefit, he trusted us with his care and was able to improve significantly. Without putting in the effort, he never would have achieved his goals.”

After being discharged from South County Home Health’s care, Michael continues to use the strategies and exercises he learned from his home care team.

“I can walk to the mailbox and back,” Michael said triumphantly. “I still get a little wobbly, but I’m able to use stairs and get dressed on my own.”

One thing that keeps him motivated is his yearly trips that he and his wife, Barbara, would take to Michigan to visit friends.

“I’ve regained my confidence,” he said. “Dr. Fox told me that I used two of my nine lives. They tell me that most people don’t recover from respiratory failure, but here I am!”

Editor’s note: On Monday, June 17, occupational therapist Linda Curry called Michael Jaye to check on his improving health only to find that he and his wife had, in fact, taken a trip to Michigan.

To schedule a visit at your home across Rhode Island, contact South County Home Health at 401-782-0500 or visit them online.