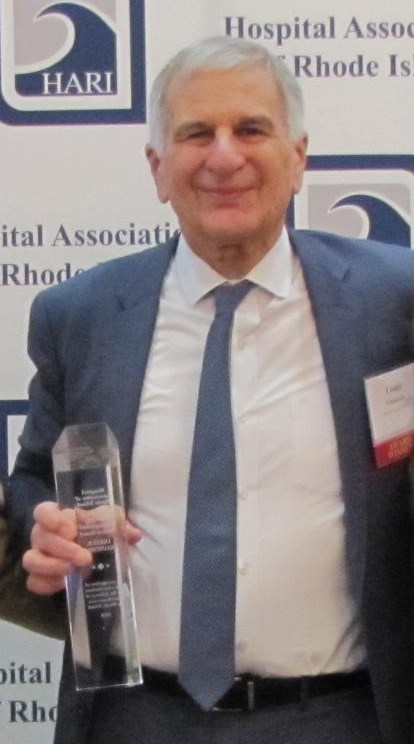 The award is presented annually by the Hospital Association of Rhode Island (HARI), honoring a person who has made significant contributions to Rhode Island’s healthcare community. Lou was recognized at HARI’s 86th Annual Meeting held on Friday, November 16, 2018 at the Providence Marriott.

Lou joined South County Health as president and CEO in November 2000. Prior to his appointment, he served as chief operating officer of the Lahey Clinic in Massachusetts and previously in a similar capacity at Women & Infants Hospital. He is a graduate of Cornell University and holds a master’s degree in public health from the University of Michigan.

Lou is a member of the Care Transformation Collaborative (CTC) board of directors, and was chairman of the State Innovation Model Steering Committee (SIM) from April 2015 until September 2016. He is also a member and former chairman of the board of the Hospital Association of Rhode Island (HARI).

He is passionate about proactively serving the healthcare needs of the community through various initiatives and is focused on building commitment of all stakeholders to quality and patient safety. He is active in the Patient Centered Medical Home movement and serves on the Thundermist Health Center Advisory Council. Lou has also participated in medical missions to Honduras to experience healthcare and public health issues within the Honduran culture.

The award was presented to Lou by Dr. Albert Puerini, president and CEO at Primary Care Physicians Corp.