A few years ago, Marco Marinelli was walking by the site of a 16th century house being remodeled in Amsterdam. A few loose bricks from the renovation, mostly broken, lay by the sidewalk. As an artist, Marco felt compelled to bend down and pick one up; eventually, back home in his Narragansett studio, he sculpted the brick into a work of art.

Marco is now helping build South County Health’s Cancer Center: Through a significant gift to our Campaign for Cancer Care, for years to come his generosity will touch the lives of countless people facing cancer.

Marco spent his professional life in the heart of Providence’s Jewelry District working at his family’s company, Marbro Mfg. Inc. In retirement, he is an award-winning sculptor and painter, as well as a patron of the arts.

Fortunately for our community, he also practices the fine art of philanthropy. 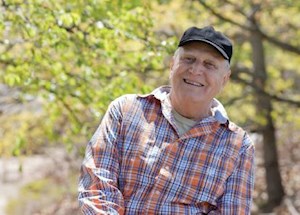 A lifelong summer resident of South County, Marco made Narragansett his year-round home in 1984. His first encounter with South County Health came in 2007, during a bout with Lyme disease. Four years later, between Christmas and New Year’s, he found himself in the Emergency Department—on the receiving end of an unexpected diagnosis: stage 4 cancer. He was initially in the care of James Smythe, MD until Dr. Smythe went to New Zealand on a six-month sabbatical. Since then, Marco has continued his care with Dr. Smythe’s colleague Dr. Gerald Colvin, and with Dr. Joseph Heineman.

“Cancer changes your life – sometimes for the better, actually,” says Marco. “For me, it has reinforced my commitment to paying it forward and highlighted the importance of giving now – of seeing the benefit of my gift while I am still alive."

When our Cancer Center opens this fall, an infusion bay will bear Marco’s name.

“Marco appreciates the impact that our new facility will have on patient care, and we deeply appreciate his thoughtfulness,” says Dr. Colvin, who matched Marco’s gift with one of his own. “Marco’s generosity will resonate in the life of every patient who receives care here."

For Marco, that personal connection means everything. “I recently told Dr. Colvin that I appreciate all that he does for me, but it’s not only medicine that keeps me alive,” he says. “It’s also my interactions with other people and cultivating friendships.”